Why Depression isn't an Emotion (part 1 of 2) 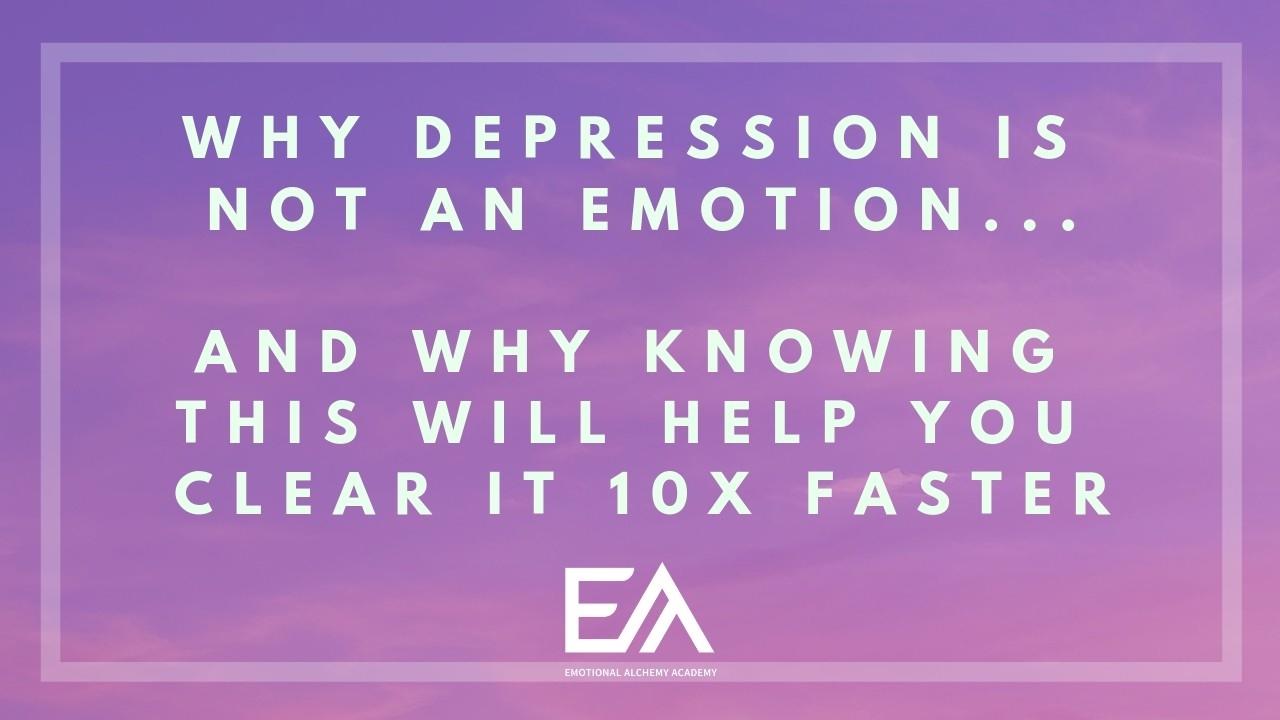 'Depression is often the unconscious suppressing ('de-pressing') of emotions. The quickest way out is to identify those emotions and clear them so that the 'lid' of depression is magically lifted away'.

Depression is one of the worst mental symptoms anyone can experience, because it makes you feel so utterly debilitated and hopeless. All desire to do anything remotely fun or meaningful disappears, and life loses all purpose.

For many years I experienced mind-numbing depression which had me hospitalized in my 20's. At the time, I had no idea what was happening to me, and neither did the doctors. They wanted to ply me with anti-depressants, but after taking them for 2 days I could feel my cognitive function declining, and so I 'declined' to take them any more.

Instead, as I lay in my hospital bed, I sank further and further into the deepest, darkest black hole I had ever been in, finally surrendering and giving up. And magically I came through, like boring through a hole into the centre of the earth and out the other side.

For many years I did not understand what had happened, but later, after much more illness, which had me virtually housebound and unable to work for 10 years, I pieced it all together.

The turning point came in my 30's, after 5 years sick with chronic fatigue syndrome (the unconscious suppressing of so many emotions you are completely exhausted with the unconscious effort needed to keep all those emotions inside), when I suddenly understood the power of emotions to create symptoms:

Unbeknowns to me, I had a lifetime of unhappy, unresolved, unexpressed emotions inside of me, which I was unconsciously suppressing and depressing, which were manifesting as chronic fatigue syndrome (chronic blocked energy) and depression (the de-pressing of emotions).

Once I discovered this, my whole life changed. With a fervour I started training in emotional clearing techniques which I used on myself EVERY DAY to scour my mind and body for stuck emotions. Every day for 7 years!

Every time I felt depressed, or exhausted with chronic fatigue, or overwhelmed with anxiety (an overload of emotions) I would sit down and identify WHICH emotions were HIDING underneath the anxiety or fatigue or depression, and CLEAR them.

The results were astounding. It worked every time. One minute I could be bed-bound with fatigue, and 5 minutes later after identifying and clearing a hidden emotion I would be full of energy again. One minute I would be depressed and feeling like there was no point in living, and the next moment I would feel hopeful and optimistic.

I'm not saying this was easy and a straight path. There were many times when it took days to identify what was going on in my psyche. Many times I would be on the verge of running to the doctor in despair, only to have a breakthrough an hour before the appointment! It was not an easy ride at all.

Even after I came through the fatigue and depression and was relatively free of either most of the time, occasionally I would be 'hit' by another bout of depression, but this time it was different. This time I had tools to deal with it. This time I understood what was going on, and that I just had to ride it through and identify the missing pieces.

Sometimes the depression was part of a natural 'healing response' as a result of deep healing work I had done. (I wrote about this in depth in my healing response blogs).

But the point I want to make here is this:

Depression is very often the unconscious suppressing ('de-pressing') of emotions. The quickest way out is to identify those hidden emotions and clear them, so that the 'lid' of depression is magically lifted away.

This is all possible if you know how. But you need the right information and the right strategies. And you need to know how to self-process negative emotions.

So what are the main emotions lurking beneath depression?

Well, I'll save that for the next installment of this blog!

For now I'll leave you with this thought:

Don't believe or buy into the pessimistic thoughts that tell you there is no way out and that it's hopeless.

You don't HAVE depression. You are DOING depression - you are de-pressing emotions, and those emotions need to be cleared for the depression to lift.

Write this out on a piece of paper and read it every day:

I CAN COME THROUGH. Even if I don't know how yet, it's possible, and I will never give up.

(I have to write this because depression can be a serious illness):

Kim Knight Health does not diagnose, cure, treat or heal any illness. Please seek out the appropriate medical advice and support as needed if you are suffering from depression. ALWAYS seek support if you need it. Try to stop buying into the thoughts that no-one wants to help you - that's just more signs of the depression. Reach out and ask for help.